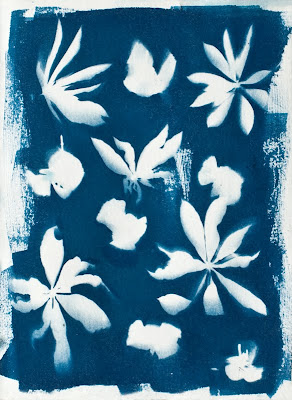 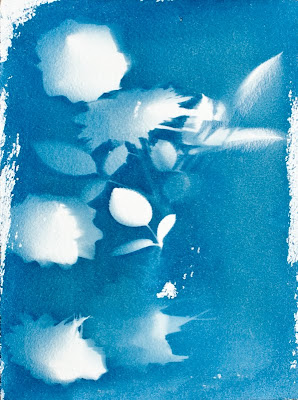 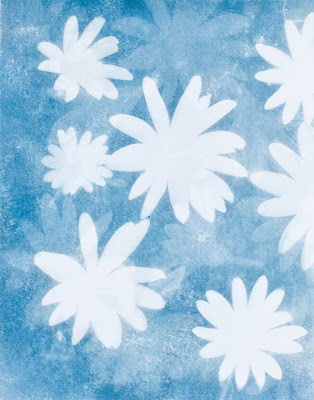 In my last posts I talked a little about photograms. Photograms are made by putting an object (leaves, flowers, strings, toys, cookie cutters, etc) onto a substrate that has been coated with a light sensitive emulsion. The emulsion is then exposed in sunlight and then fixed in photo chemicals. Here are some examples of photograms I did with cyanotype a while ago.
Posted by Rebecca Harbaugh Alternative Photography at 10:17 AM 1 comment: 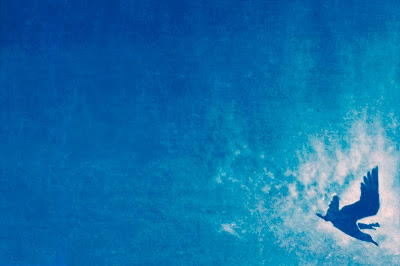 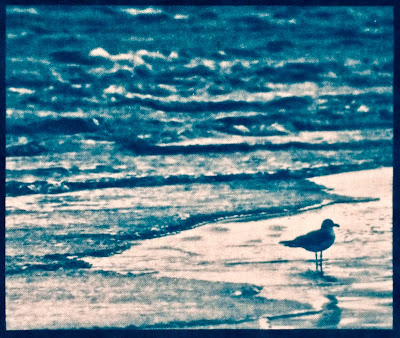 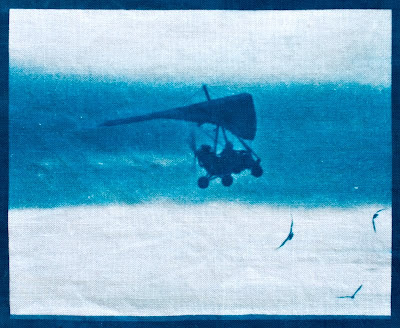 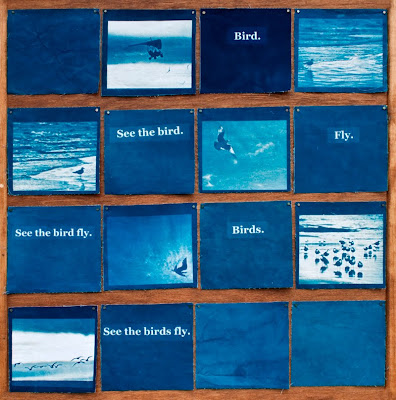 I am making a small children's book with images of birds. The inspiration for this book comes from the old school Dick and Jane books, with extremely simple text and sentence structure. I printed the images with a historic photographic process called cyanotype. This time I didn't print on watercolor paper though, but on cloth. I really liked using cloth as a substrate. I like the softness of the pages and the texture added to the print. I found it a more appropriate and durable substrate for a children book. I still need to figure out a way to keep the edges from fraying though. Any suggestions of the easiest, cleanliest way to fix my edges? Once I do that, it will be ready for me to stitch up into a book form and it will be done. I enjoyed this project so much I plan on making a few of them to sell.
It was really great using the cloth pages for a book too because it is easier than using watercolor paper. This is because the cloth is already pretreated with the chemistry and I don't have to mix and coat the chemistry on myself. There are two great websites where you can buy these pretreated cyanotype cloth pieces:

The later website even has different colors of cyanotype. If you want a fun, simple art project to do I recommend buying a packages of small squares, a large sheet, a t-shirt, whatever you'd like from this website (if you are into quilting and sewing, this is a fantastic way to get your own distinct pattern to work with. The material is washable). While you are waiting for the cloth to come in the mail, start thinking of some fun shaped objects you would like to use for your art piece. This can be flowers or leaves or maybe something like scissors and paper clips or maybe a paper cuttings you did. Whatever it is, make sure its size is compatible to the size of cloth you ordered. When your cloth gets here, take it out of the package, lay your objects on top of it in direct sunlight. It usually takes maybe 10 to 15 minutes (see instructions that come with purchase). After it has been exposed take it back inside. Give it a water bath for about 5 minutes. Then move it to a second water bath that has a little bit of hydrogen peroxide in it(a capsule or two). It only needs to be in that bath for 15 to 30 seconds. (The hydrogen peroxide in the second bath is optional, but recommended. Using it will give you a deeper, richer blue color in your cyanotypes). Then move it to a final bath and let it rinse for 10 to 20 minutes. Hang or lay to dry. And that is it! You have just created some beautiful art!
I have quite a few upcoming art projects I have been gathering plants for, where I will be making cyanotype photograms. I am very excited to create them! I think plant photograms are very beautiful. For inspiration, enjoyment and a vision of possibilities, yet out this artist (make sure to read the artist statement, it is very well written and gives a wonderful insight to the beauty of creating photograms). Also, check out Anna Atkins work, I highlighted her briefly in the post previous to this one:

I think it is important to support shops like the Blueprints on Fabric store so that they stay open and running. I hope each one of you tries it out. It is a super great activity to do with kids too...at birthday parties, preschool lesson, visit to grandmas, etc. ENJOY!
Posted by Rebecca Harbaugh Alternative Photography at 8:27 PM 3 comments:

New York City and the Many Beautiful Historic Photographs

I went to New York City for the purpose of having an exquisite and rejuvenating art experience. And that is exactly what I got! It was well worth the efforts to get there. I saw some of the most beautiful art from dozens and dozens of the many well known masters of art. It is such a different experience to see these things in person rather than just in an art history textbook.
I would like to highlight some of the amazing, historic photographers whose work I saw at the art museums I went to in New York City (the Guggenheim, Metropolitan and Museum of Modern Art): 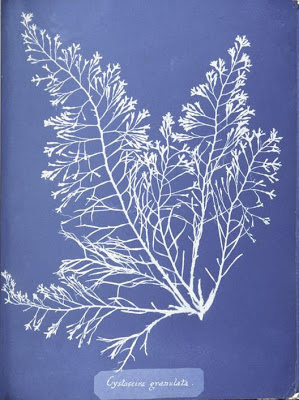 Anna Atkins, (1869-1950), Cyanotype Print
Anna Atkins was a botanist/photographer who created the first photographic book ever made, which consisted of photo-grams of plant life using a cyanotype printing process. The book is titled "Photographs of British Algea: Cyanotype Impressions." I had the opportunity to see a sample page from her original book. 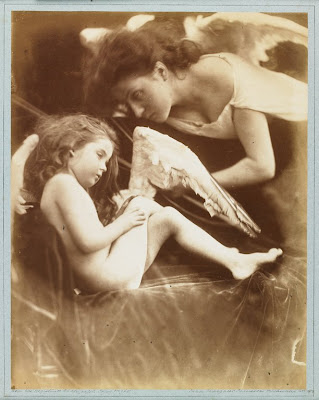 Julia Margaret Cameron, (1815-1879),Venus Chiding Cupid and Removing His Wings, Albumen Print
Julia Margaret Cameron is one of my favorite early photographers. She was very ahead of her time and a great pioneer in creating artistic photography. Her work is well worth looking into; she has some really beautiful creations. 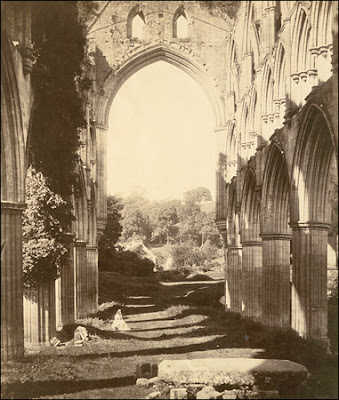 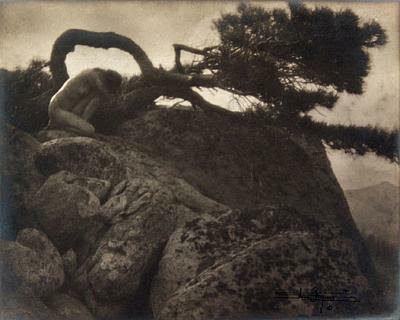 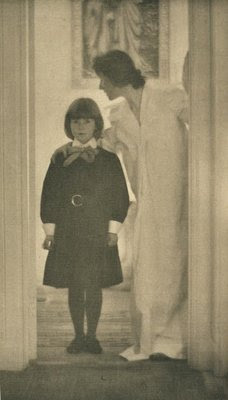 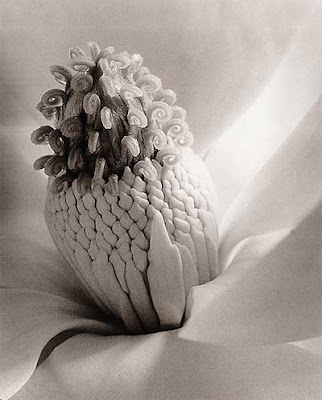 All three of these artist are American Woman who belonged to a group called the Photo-Secession. This was a group of photographers who fought for photography's acceptance as an art form. They approached their art with a more pictorial, soft, moody feel. I really, really enjoy this style of photography both for the philosophy behind the group and also for more dreamlike, emotional feel to the photographs. 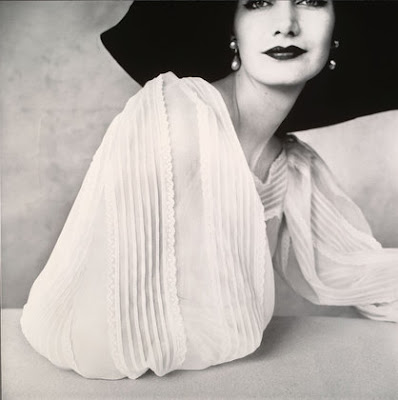 Irving Penn, Large Sleeve, 1951, Gelatin Silver Print
Classic, inspirational, talented portrait photographer - known as one of the best! About 12 to 15 or so of Irving Penn's original silver gelatin prints were on display at the MOMA and they are all gorgeous prints. 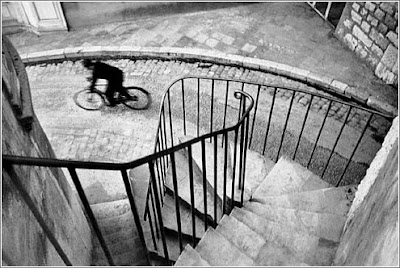 Henri Cartier-Bresson, Hyeres, France, 1932, Silver Gelatin Print
Henri Cartier-Bresson is known as the "father to modern photojournalism." He is most famous for his photographic philosophy "the decisive moment." The best way I can think of to describe this concept is in Henri Cartier-Bresson own words: "There is nothing in this world that does not have a decisive moment...Photography is simultaneously and instantaneously the recognition of a fact and the rigorous organization of visually perceived forms that express and signify that fact." (Quote cited from Wikipedia).
Currently at the MOMA they have an entire exhibit of Henri Cartier-Bresson's photographs. There is easily over a hundred on display. It was an incredible experience to be able to make it over there and see the exhibit.
My entire art trip to New York City was absolutely amazing and I can't wait to go back! What a wonderful thing that there can be so much beautiful art all in on city.
I have one last artist I want to highlight: William Kentridge. He was actually my favorite part about my entire trip. I liked his show the very best. He isn't even a photographer. He's actually best known for his animated films. He has done a lot with theater and film. He also does printmaking, paper-cutting, and charcoal drawings. Hope you enjoy, unfortunately these small internet images don't even do it close to enough justice...at all! His work is breathe taking in person, but this will give you an idea of his style of work: 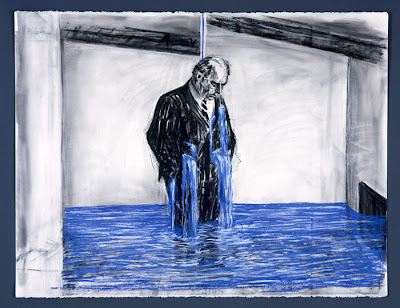 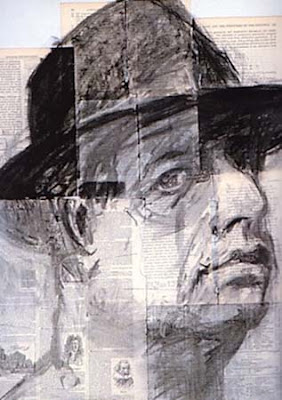 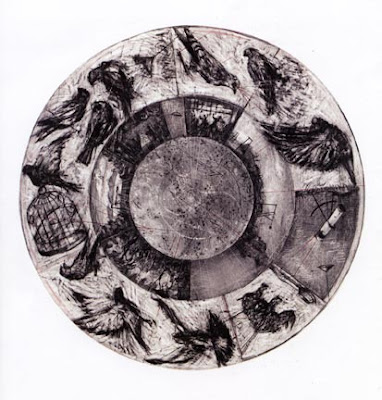 What I like about William Kentridge's work is the sense of humility that is offers. It is simple, rough, depends greatly on contour lines and has a moody edge to it. He has a large variation in his work, yet it all holds a distinct signature of his style. I can tell that thought, concept and effort were put into each piece. I relate to it on a raw human nature level, if that makes sense? Anyways, I learned a lot about my own art work and got a lot of great ideas from viewing his show. He has a gigantic exhibit going on at the MOMA right now. He filled rooms and rooms all with his own work. That really impressed me.
What are your thoughts and critic on his work, and the other artists I have shared?
Posted by Rebecca Harbaugh Alternative Photography at 6:11 PM No comments: